Click here for Blackberries Fruiting Chart
GROW BLACKBERRIES EVEN IN THE
NORTHERN STATES!

PRIMOCANE FRUITING BLACKBERRY
Canes grow and produce fruit in the same growing season (similar to Heritage red raspberry). This is a major breakthrough for those in northern climates where cold winter temperatures traditionally do not allow for overwintering of blackberry canes. These varieties will allow the berries to grow anywhere the summer is long enough to grow the cane and ripen the fruit.

At Indiana Berry and Plant Company, we see the greatest opportunity for these new varieties in the Northern climates where you can finally produce fresh blackberries by mowing off the canes each winter and producing only the fall crop each year on the new canes. Varieties are thorny with good upright growth and should not require any trellising.

Prime-Ark 45™
Third primocane fruiting blackberry released by the University of Arkansas. Tests indicate that Prime-Ark 45™ yields better than previously released primocane blackberries. Berries are medium to large (6 grams) when grown in Arkansas but larger when grown in more moderate summer climate such as Oregon and California. Sugar levels averaged 10% -- just under Ouachita. Berries stay firm and black without much leak and not prone to mold which makes them well suited for storage and shipping. (Zones 4 - 9).

Prime Ark Freedom™
First Thornless Primocane Blackberry!  Best suited for home gardens and local commercial markets.  Fruits on first year canes (primocanes) as well as second year canes (floricanes) in Zone 6 or warmer.  If properly managed you can get two crops!  The crop on the second year canes may be most important as the fruit will ripen before Spotted Wing Drosophila becomes a problem.  Fruit size on primocanes is approximately 10 grams - a NICE SIZE BERRY - with soluble sweets at 10%.  While date is not complete, Prime Ark Freedom seems to ripen before Prime Ark 45.  Hardiness TBD. 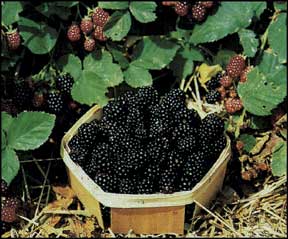 Shawnee (Plant Patent #5686)
Shawnee has produced as much as 13,000 pounds per acre in Arkansas fruit sub-station tests. It does not appear to have a peak during the harvest season--producing heavily for several consecutive weeks. Shawnee extends the marketing season for blackberries for local marketers. It is sweet and juicy!

Apache (Patented)
This new release from Arkansas produces larger fruit and higher yields than any of the other previously released Arkansas thornless erect blackberry cultivars. Apache will ripen 10 days or more later than Arapaho but earlier than Navaho. The Apache fruit are blocky and conical with a very attractive glossy black color. Early reports show fruit to be larger than Arapaho or Navaho with eating and holding characteristics to be better than Arapaho but not quite as good as Navaho fruit. Canes of Apache are more erect than other thornless varieties and can be grown without a trellis when primocanes are tipped at 42" to control primocane length and encourage lateral shoot growth. Apache should grow well where Arapaho and Navaho have been successfully grown.

Arapaho (Plant Patented #8510)
Arapaho fruit is short-conic, bright glossy black and firm. An important positive characteristic is its small seed size. It is the earliest ripening thornless blackberry cultivar known to date. The fruiting period of Arapaho is concentrated into less than 4 weeks. The outstanding characteristics are thornless, erect, self-supporting canes, good fruit quality, earliness of ripening, and its ability to establish a full fruiting row quickly. This variety will compliment Navaho in providing a long harvest season for quality, thornless blackberries.

Chester - 1985 Maryland (Thornfree x Darrow)
Chester is the most winter hardy of the thornless varieties. It is a late season berry with large fruit and mild flavor. Chester is most resistant to caneblight caused by Botryosphaeria dothidea. The fruit is of high quality, does not soften or leak color on hot sunny days.


Natchez - 2013 Texas Superstar Selection
Natchez ripens early, about the same time as Arapaho, but with higher yields. Fruit size is comparable to Apache, approx. 8-9 grams. Sugar content averages 9.5%. Canes are semi-erect so would benefit from trellising. Natchez has not been tested in areas with reduced chilling, such as Florida. No substantial common diseases observed.

Navaho 1988 (Patent # 6679) University of Arkansas (Ark. 583 x Ark. 631)
Navaho has great potential as the first upright, thornless blackberry having the best flavor of any blackberry. However, the berries are the smallest of all varieties. It has yields as high as 8,000 pounds or more per acre. The canes should be topped at shoulder height a couple of times during the season. A good berry for shipping.

Osage - ATTENTION COMMERCIAL GROWERS!
This medium size, firm berry has great flavor and excellent storage potential.  Osage ripens 5 days after Natchez and earlier than Ouachita.  Fruit size is approxiamtely 6-7 grams with soluble sugars at 11%.  The higher the percentage of soluble sugars the sweeter the berry!  Yields comparable to Ouachita.  (Zone 6-9)

Ouachita (Patent Pending)
This blackberry is the latest release from the University of Arkansas. Ouachita, pronounced WAH-shitah, is a very upright growing vigorous thornless blackberry. Plants can be self supporting when primocanes are tipped at 45 inches. However, trellising may be needed to keep a full crop from leaning out of the row. Fruit quality is excellent. Berries are firm, sweet and larger than Navaho and Arapaho, but smaller than Apache, averaging 6 grams each. Fruit matures about 7 days before Navaho starting in early June in Arkansas and mid July in Michigan. Yields are high, sometimes exceeding those of Apache and Navaho in most tests, and Arapaho consistently. Although it is too early to know for sure, winter hardiness appears similar to Apache and hardier than Arapaho, but silightly less hardy than Navaho. Ouachita appears to be resistant to double blossom and no orange rust infections have been observed in any of the trials. Only when exposed to extremely wet conditions have anthracnose infections been reported.

Triple Crown
Large, sweet, aromatic blackberries called "Triple Crown" may run away from the competition once they begin appearing in supermarkets around the country in a few years. Triple Crown is the newest thornless blackberry from the Agricultural Research Service's Fruit Laboratory in Bellsville, MD. The berry is named for its three crowning attributes-flavor, productivity and vigor. It's being offered for sale by some nurseries for the first time this year. Triple Crown ripens from about July 10 to about August 10. The plants yield large, glossy black fruits that are pleasantly firm and able to withstand the rigors of shipping. Attractive and flavorful, it ripens later than the popular "Hull Thornless" blackberry and a week or so earlier than another widely planted berry, "Chester Thornless." Triple Crown berries are larger than both of these other commercially grown varieties, and should help ensure that berry farmers, owners of pick-your-own operations and backyard gardeners have a constant supply of big, flavorful thornless blackberries throughout the ripening season.

Von - New Release from North Carolina
Canes are erect and fruits at the same time as Navaho. Fruit is medium to large, averaging about 6.6 grams. Berries are sweet, have small seeds and low acidity. Initial results show better tolerance to wet conditions than other varieties. Suggested for growers in southern regions. (Hardiness Zone not yet determined)

ABOUT US
History
Newsletters
Map / Directions