We have been in business since 1992. We have over 50 years combined experience and knowledge. Ask our experts how to make the most of your growing season. 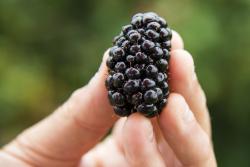 32 pages of practical advice.
Topics include

Based on our experience this is just the right formula for brambles.
12-10-10See More Details

A great way to minimize transplant shock and give your new plants a head start.
Available in 1 oz, 4 oz, 8 oz or 16 oz quantities.See More Details

The Fruit Gardener's Bible by Lewis Hill and Leonard Perry
A Complete Guide to Growing Fruits and Nuts in the Home Garden
Enjoy bushels of crispy apples and baskets of juicy blueberries from your own backyard. Authors Lewis Hill and Leonard Perry provide everything you need to know to successfully grow delicious organic fruit at home, with tips on cultivating strawberries, raspberries, grapes, pears, peaches, and more. 320 pagesSee More Details

Most videos are written and produced by Indiana Berry & Plant Co. If you would like to view all of our videos, please visit our Video Library.

Sam's Tip:
Gardeners in northern climates (Zones 3-5) have had success growing summer bearing blackberries by planting trailing varieties.  Remove the canes from the trellis in the fall and lay them flat on the ground.  Cover them with a thick layer of straw mulch and provide a windbreak to create a thick cover of snow to protect the canes from winter damage.  Re-trellis the canes in the spring.  This method has been successful on a regular basis.  In my opinion, this is too much work for commercial growers.

We currently ship within the U.S. using UPS Ground, 3-Day Select, 2-Day or Next Day Air. For UPS ground service, the minimum shipping charge is $10.00.

Expedited Shipping: Unless you have a specific need to ship quickly, it is not necessary to choose expedited shipping. The majority of our plant orders ship UPS Ground or Priority Mail and arrive by the end of the week they are shipped in terrific shape, ready for planting.

Special Note for Alaska: All Alaska orders are shipped Priority Mail. Shipping cost depends on number of boxes and total weight, which we do not know until your order is packed. Therefore, your credit card will be charged two different times. Once at time of order for merchandise only and again at time of shipping for shipping costs only. If you want to be notified with the shipping cost prior to your card being charged please make a note in the comments section. Keep in mind this will delay your shipment if we are unable to reach you.

ABOUT US
History
Newsletters
Map / Directions